After 20 years in South Africa, and 15 of those with Rhodesian Ridgebacks, I returned to my native Sweden in May 2002. I brought with me my two dogs, Orangelad (generally known as Churchill), and Lionesque Clementine.

Their first litter was born in July 2002, and the three puppies grew up in a truly domestic environment; all my carpets now seem a wee (!) bit more worn than they were prior to this event. A second litter was born in November 2003, a third in August 2004, a fourth in June 2006 … and so we carry on!

In my opinion, physically and mentally sound dogs do become man’s best friend, and that is what I am aiming for. If they are beautiful to boot; well, that’s a bonus! 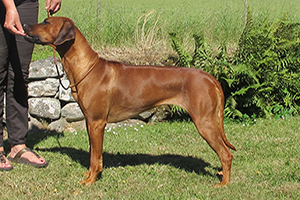